Born in Torino in 1847, the son of Giuseppina Quarelli and Giuseppe Rocca, Enrico lived quite a hard childhood and, as a result of the difficult life of his father and due to his early death, his apprenticeship was unaspectedly interrupted when he was seventeen: in order to make a living, Enrico worked as a boatman, a sailor, a carpenter in the harbor of Genova, a woodworker, until 1880 when he opened his first workshop in Genova in Vico Pomogranato. During the first years he made mainly plucked instruments and only in the early nineties he started making violins with regularity: at the edge of the century Enrico Rocca’s output became consistent and his instruments were sold not only in the local market but in England and other countries as well. Enrico Rocca was a conservator of the “Cannone” of Paganini, housed in Genova Palazzo Doria-Tursi; he died in June 1915 in his home in Salita della Misericordia.

The violins here presented are representative of the mature style of Enrico Rocca: although is evident an inspiration coming from his father’s work especially in the Strad models, he always shows a personal touch and his interpretation of the violin of Paganini, the “Cannone” are among the highlights of his production. 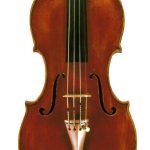 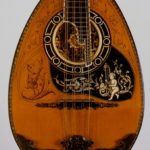