The son of a woodworker, Giuseppe Lecchi was born in Felizzano (Alessandria) in 1895; after a long service in the Army during the first World War, he came back home in 1919 only and a few years later he entered the workshop of Cesare Candi in via di Porta Soprana in Genova. A talented and skilled craftsman, Giuseppe Lecchi was an ideal partner for Candi, especially in the construction of the last series of decorated instruments made from 19124 until 1931. During the thirties Giuseppe Lecchi worked on his own in his workshop in Corso Galliera, Genova and in 1937 he partecipated to the competition in Cremona wining a gold medal for a quartet; he was encharged of the conservation of the violin of Paganini the “Cannone” of Giuseppe Garneri del Gesù housed in Palazzo Doria-Tursi. Giuseppe Lecchi died in Genova in 1967.

A gifted and skilled craftsman, Giuseppe Lecchi always shows in his work a refined touch and a high technical level; he mainly worked on Stradivari models. The violin here presented is one of the best of his production and it reveals a Torinese inspiration. 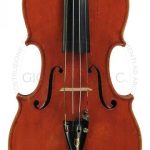 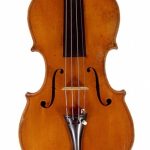