The elder brother of Cesare, Oreste Candi was born in Minerbio (Bologna) in 1865. After a short period in the workshop of Raffaele Fiorini, Oreste moved to Genova around 1886, finding a job in the small firm “Fratelli Barberis”, a workshop oriented in the production of plucked instruments. In the mid Nineties’ he opened a shop together with his brother Cesare in Via die Servi, and at the down of the new century he settled in vico Dritto Ponticello where he worked together with his wife Luigia until 1932, when they were forced to leave due to the renewal of that area of the genoese historical centre, moving the workshop in Via Bosco. Oreste died on 8th of September 1938.

Although less talented than his brother Cesare, Oreste had a more spontaneous and ‘freewheeling’ attitude: his work, less clean and neat than Cesare’s one, shows a more direct approach and some of his early works inspired by the genoese makers of the eighteenth century are remarkable. 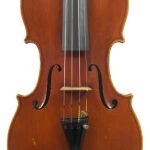