Information regarding Nicolò Bianchi’s apprenticeship are still obscured: formerly a violin player, it seems that he worked in Genova during the late 1830′s collaborating with Delle Piane and probably with Lodovico Rastelli; after 1841 Nicolò Bianchi began travelling and working in different cities in France like Aix-en-Provence, Montpellier, Bordeaux, Arles, Nantes finally settling in Paris in 1946 where he remained until 1868. Back in Genova the same year, Bianchi definitely moved to Nice in 1878 where he died in 1880.

A talented copist and expert in italian violin making, Nicolò Bianchi had a priviledge for Guarneri and Maggini models: besides a good production of antiqued violins, he made instruments “in the new” as well, especially in his last period. Nicolò Bianchi trained Giuseppe Scarampella, Eugenio Praga, François Bovis and probably the young Gaetano Antoniazzi. 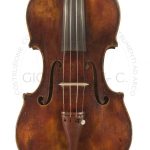 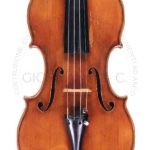