In the summer of 2000, an article appeared in the Genoese newspaper Il secolo XIX under the eye-catching headline ‘A Geppetto of genius who plays like Paganini’. The full-page report contained the revelation that an obscure 87-year-old carpenter called Giuseppe ‘Pippo’ Gaccetta, who lived in Genoa’s medieval old town, had once been a virtuoso violinist and had made a sublime 1931 recording of a selection of Paganini’s caprices. Even more astonishing was the claim that through his teacher, Francesco Sfilio, Gaccetta was a direct violinistic descendant of Paganini and as such was heir to the great Genoese virtuoso’s technical secrets.

Gaccetta’s story had come to light a few years earlier when Giuseppe Bignami, a cellist in the orchestra of Genoa’s Carlo Felice opera house – who was one of three musicians mentioned in the Il secolo XIX article – took his instrument to Gaccetta’s workshop for an adjustment to its endpin. Bignami had listened with astonishment as Gaccetta had talked passionately about the violin, his studies in 1920s Genoa and the circumstances that had brought an end to his virtuoso career after the Second World War. Bignami told his colleagues in the opera house orchestra about the encounter and Gaccetta’s story quickly spread through local violin-playing circles. Soon players of all abilities were coming to Gaccetta for lessons and advice on violin technique.

In 2001, Gaccetta’s life and the knowledge he harboured became the subject of a book, Giuseppe Gaccetta and the Secret of Paganini. According to the book’s author, Giorgio De Martino, the carpenter was born into a humble Genoese family in 1913 and endured an unhappy childhood: his mother died when he was three years old and soon after his father abandoned him. He was raised by his uncle, Giuseppe Montella, and was sent to work in a greengrocer’s shop while still a boy. Gaccetta was eight when he first heard the sound of a violin being played in the alley where he worked. Unable to afford an instrument or lessons, he had to wait a further four years for his first musical instrument, a mandolin given to him by his cousin Raffaele. Gaccetta received his first violin lesson in 1927 from the Genoese concertmaster Giuseppe Venturini, with whom he studied for two years. The carpenter claimed to have been a second violin in the opera house orchestra from 1929 onwards, apparently playing under such renowned conductors as Angelo Questa, Vittorio Gui and Tullio Serafin.

Gaccetta told how, in late 1929, disappointed by Venturini’s methods, he approached the blind violinist Francesco Sfilio, who gave classes in a private music school in Via Chiossone, a short walk from the opera house. According to Gaccetta, Sfilio was a former pupil of Camillo Sivori, Paganini’s only student, and was a high-class soloist in his own right who had been praised by Pablo Sarasate. He published a two-volume method in Turin in 1934 and a book, Alta cultura di tecnica violinistica, was published in Milan in 1937. Sfilio agreed to teach Gaccetta for a few months, and promised him that if he completed his step-by-step teaching method satisfactorily, he could enter his school of around 100 students in San Remo, a town to the west of Genoa on the Italian Riviera. The basic elements of Sfilio’s method, as recalled by Gaccetta, were the steady positioning of the left thumb on the heel of the neck, a complete rejection of the shoulder rest and total dedication to the study of the instrument. Gaccetta mentioned how during the trial period before entering Sfilio’s San Remo school, he would practise with a complex device that required him to attach elastic braces to the thumb and index fingers of his right hand and suspend weights from his elbows, in order to build up strength. He also recounted how he would practise for 16 hours a day when he eventually entered the San Remo school.

Gaccetta recalled that, thanks to Sfilio’s teaching methods, he was able to record the selection of Paganini’s caprices in 1931, at the age of 17, just three years and ten months after his first lesson. He later recounted the episode: ‘On an October morning while walking in Piazza della Meridiana, a shopkeeper I knew, who sold cameras and radio equipment, called me over. He invited me to try his recording machine, a wax cylinder phonograph.’ Gaccetta told how Sfilio forbade him to play Paganini’s music in public and instructed him to practise alone, far from potential listeners. Sfilio, he said, had plans to hold an international violin contest, the Grand Kermesse, with the support of the Fascist government, in which his Italian violin school would defeat the very best international players. The event was scheduled for 1940, to coincide with the 100th anniversary of Paganini’s death, and Milstein, Kulenkampff, Heifetz and Menuhin were among the players from abroad who had agreed to participate. Gaccetta was to be the Italians’ secret weapon in the competition, he claimed. In the event, the Grand Kermesse never took place and, after working during the 1930s in an orchestra in Nice, Gaccetta’s career was cut short by the war, he said. Finally, he decided to retire from violin playing and opened a workshop instead.

For Gaccetta, the book and the article in Il secolo XIX proved to be stepping stones to national and international recognition. The diminutive old carpenter appeared on several radio and TV programmes and was interviewed by music magazines, and his recording of Paganini’s caprices was remastered on CD. Both Sfilio’s violin method and his book were republished complete with a preface written by his grateful pupil Gaccetta, who had at last received due recognition. In subsequent years the small restaurant where Gaccetta had lunch every day – and where he always treated friends and well-wishers on surrounding tables to coffee – became a magnet for violin players from Italy and abroad. Gaccetta started to give free lessons in his house nearby, which was full of more than 11,000 records, as well as pictures, memorabilia and former students’ violins.

Gaccetta soon became a household name in Genoese and Italian musical circles. He was recognised as the descendant of the Paganini school (Paganini–Sivori–Sfilio–Gaccetta) and was awarded the Golden Griffin, the highest civic award of the city of Genoa, and the title of Commendatore by the then Italian president Carlo Azeglio Ciampi. Genoa’s Conservatory of Music even created a new course dedicated to Sfilio’s method, which was taught by two of Gaccetta’s students, Eliano Calamaro and Andrea Franzetti. The ‘Maestro’ also received enthusiastic and positive feedback from many important and famous players such as Giulio Franzetti, Franco Gulli, Ruggiero Ricci and others.

This enthusiasm, however, was not shared by several other musicians and scholars, who picked up on a number of contradictions and inconsistencies in Gaccetta’s story. It was strange, they said, that within the musical community of a comparatively small town like Genoa in the 1930s, a talent such as Gaccetta’s should have gone completely unnoticed. They also said that no evidence existed to support the claim that Sfilio had been a pupil of Sivori, and that also there was no record of his concert activity. They said that there was no evidence of a well-organised and well-attended violin school in San Remo either and moreover, they asked, how could a blind teacher cope with 100 students? In 1938, Italy’s Fascist government passed the anti-Semitic racial laws; Gaccetta’s critics said that it was absurd to suggest that leading Jewish players from abroad would have accepted an invitation for a violin competition under these circumstances. There was also the sound quality of Gaccetta’s 1931 recording: it included brilliant, pure high trebles that would have been impossible to reproduce using a wax cylinder phonograph, the doubters claimed. Finally, they pointed out that when the full story emerged there were no living witnesses to testify to Gaccetta’s or Sfilio’s deeds. It should be noted at this point that Gaccetta was encouraged to talk about his life by affectionate friends and students; he did not promote himself off his own bat.

The first suggestions that Gaccetta’s 1931 recording could in fact be a modern one came from northern Europe and Russia. By guessing at the fingerings used in the recording, the certain sceptics suggested that the style of playing could be consistent with the Soviet school. Massimo Coco, a violin teacher at Genoa’s Conservatory of Music decided to investigate further, following all lines of enquiry in order to verify Gaccetta’s claim. After an exhaustive search of the internet,
Coco came across a recording Vasile had made in 1969 for Deutsche Grammophon’s Debut Collection, on which the young and graceful violinist Cornelia from Timişoara, Romania, played exactly the same selection of Paganini caprices, and in the same order. He superimposed the tracks of the two different recordings with a digital sound-editing application and came to the conclusion that they were identical.

It is extremely difficult to find any information about Cornelia Vasile: the sleeve notes of the 1969 record inform us that she had an extraordinary talent for the violin, an anxious disposition, and that she had rehearsed through the night on the eve of the recording session. Vasile came to Genoa in 1973 to compete in the Premio Paganini. In the competition’s archives it is reported that she passed the first two rounds but wasn’t admitted to the final, seemingly as a result of which she attempted suicide. It seems that she went back to Germany and there were rumours that she had taken her own life there.

When confronted with Coco’s findings, Gaccetta could find no satisfactory explanation. A few months later, on 15 October 2008, he had a fall in his house and died shortly afterwards in hospital. His funeral took place in San Donato, a small Romanesque church a short walk from the ancient alley in which he lived. The church was crowded with relatives, affectionate pupils, waiters and cooks from his favourite restaurant and neighbours, who had all come to pay their last respects to ‘Pippo’, ‘il Maestro’, the carpenter who had once played the violin like Paganini. 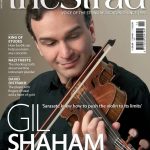