Paolo De Barbieri was born in 1889 in Genoa. In 1902, aged 13, he left a note on the kitchen table saying ‘Back in a minute’: he left home for about six years to work as a cabin boy. He completed his military service in the Navy and in 1912 received a medal for participating in the Italian attack on the Dardanelles, part of the Italo–Turkish War. It is not clear when De Barbieri started making violins; it seems that during his naval service he made guitars for his friends. He then entered Cesare Candi’s workshop as an apprentice, remaining until about 1919 when he opened his own shop in the Piazza Paolo Da Novi, Genoa. He always worked alone without any help, making a sizeable number of violins and violas, plus a few cellos. He participated in various competitions and received a special prize in Cremona in 1949, for the best quartet made by a living Italian luthier. In 1960 he sat on the jury of the Liège Competition in Belgium. De Barbieri died in Genoa in 1962. His son, Renato De Barbieri, was a well-known violinist in the 1950s and 60s.

De Barbieri’s style was influenced by Cesare Candi. He always made use of an external mould and the continuous spruce linings that are always visible in the interiors of his instruments. Apart from a very few examples from his late period, every instrument made by him has these features. The 1937 violin shown here is inspired by the 1743 ‘Cannon’ Guarneri ‘del Gesù’, a model very often used by the maker. De Barbieri carved quite full, round archings in the 1930s and 40s, especially in the C-bouts, as can be seen in this example.

The peculiar cut of De Barbieri is clearly visible on the f-holes of this violin. The cut is strongly perpendicular to the arching, especially on the external flanks.

The ‘black’ is made from ebony and the ‘white’ from maple. Purfling strips are carefully set in the channel and the joints cut straight on the centre line. The bee-stings have quite short extensions.

The scroll was inspired by the model of the ‘Cannon’: the turns are carved quite deep, the chamfer cut with a chisel and then smoothed with a scraper and sandpaper. The rather deep scoop in the rear and front view reveals a consistent smoothing action.

The violin is one of the very few made by De Barbieri with a slightly antiqued finish. The spirit varnish has a good, thin texture, lying over a reflective ground.

De Barbieri used only two labels in the course of his career. The first, inspired by that of Cesare Candi, reported his apprenticeship with him. The definitive second label, which is used here, appeared in around 1922.

The brands ‘P.DE BARBIERI-GENOVA’ are visible both in the interior of the soundbox and on the rib joint under the button. 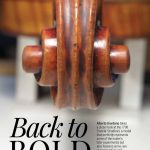