Ludovico Rastelli was born in 1801 in the small village of Castelletto Scazzoso, located in the hills of Monferrato, Piedmont. Nothing is known about the early period of his life, nor about his move to Genoa; the earliest information we have regarding his career is a restoration inscription in a German violin, which shows that by 1835 he was working at the city’s Piazza Lavagna. Despite this lack of information, archival documents show that from that date onwards he was recorded as an instrument maker and repairer in several places, always in the city’s historic centre. He died in Genoa in 1878 after a long and uninterrupted career.
Rastelli mainly worked alone, perhaps assisted in later life by his daughter Vincenza. In his early period he was mainly concerned with repairs, and mostly made guitars. Later he produced a good number of violins, cellos and violas, plus a few double basses. Sometimes he decorated his instruments with extra purfling. Although it is unknown where and by whom he was taught, his work appears to be rooted in the tradition of 18th-century Genoese violin making. Certain features (the carving of the scroll, the ground and the varnish) can be related to the early work of Nicolò Bianchi (1803–81), also based near Genoa.

This 1870 violin shows the influence of the work of Guarneri ‘del Gesù’, in particular the 1743 ‘Cannon’ violin once owned by Paganini. Since Rastelli could only have seen the instrument while it was being exhibited at the Town Hall,
it seems that he had just taken freehand notes of the f-holes and scroll. The violin was made using an internal mould. The linings are made of spruce and are set roughly into the corner-blocks; a local, slightly figured maple was used for the back plates, and a fine, narrow- grained spruce for the front.

Carved with great care and skill, the arching of the front looks well rounded and balanced, descending quite flat to the edges. The back arching is of lower height and looks slightly flatter. The purfling is made of maple; the black is more of a brownish colour and is thinner than the white.

The varnish looks attractive and well formulated, over a slightly dull ground. A certain lack of transparency is balanced by a nice colour and a soft texture, which all give a pleasing look to the violin. Thoughts on Rastelli’s varnish were recently published in the book Violin Varnish by Koen Padding, edited by Helen Michetschläger.

One of the violin’s most intriguing features is the neck-set. Mortised in the top-block, the neck bears a nail that fixes it permanently to the rib structure. The belly was set at a later stage, with the edge running continuously below the neck root. This kind of hybrid neck-set seems to confirm a certain resistance of some Italian makers (such as Enrico Ceruti and Gaetano Dionelli) who were still using the obsolete Italian technique in the second half of the 19th century. 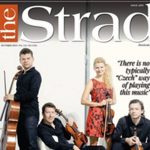