Maker Gaetano Gadda was born in Sorgà, a small village near Mantua, in 1900. He began violin making seriously in 1919, in Stefano Scarampella’s workshop, and his apprenticeship lasted until Scarampella’s death in 1925. The year before his death, Scarampella made Gadda the manager of his workshop due to his poor health. In exchange, Gadda made a commitment to make one violin for Scarampella every month until his death. Gadda worked in Mantua his whole life, and died there in 1956. He is considered the only pupil of Stefano Scarampella and made a good number of instruments in the models and style of his master, especially in his first period. Around 1935 he developed a more personal style and began to use models inspired by Guarneri and Stradivari. After the Second World War his work shows more careful workmanship and a closer attention to classical instruments, while always reflecting Gadda’s distinctive style. Made in Gadda’s early mature period, this cello is a good example of his work, revealing his spontaneous and personal approach to making.

This cello bears Gadda’s usual label, describing the maker as a gold-medal winner. ‘GG’ is inscribed in a rectangle on the button.

Made with an internal mould, the interior has pine blocks and linings made of willow mortised into the corner-blocks.

Well-rounded in the centre bouts, the archings are high (the belly is 31mm, the back 30mm) and gently worked on to the borders, where they remain quite full.

These are a personal interpretation of a Stradivari model: the f-holes are cut with confidence, showing small nicks and a light scoop on the palettes, and are slightly undercut in the outer sides (towards the borders).

The borders are strong and round, with a deep scoop cut close to the purflings. Overhang from the side is between 3mm and 3.5mm, and the height of the border is 6mm on the belly, 5.5mm on the back. The purfling (about 1.2mm) is made of maple and ebony, and creates long, pointed corners, where tracks of a double-blade purfling marker are visible.

At the rear and the front there is no evidence of a scribed centre line. The scoop is quite light and the rear button has a slightly asymmetrical cut in its extensions.

The colour is a very attractive and intense orange–brown, laid over a strong ground that enhances the beauty of the deeply flamed maple. The consistency is rich and the texture shows pleasant wear at the contact points. 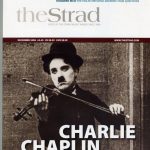 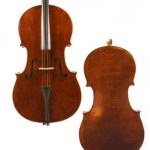