Born in 1804 in Albissola, a small village not far from Genoa in the western riviera, Nicolò Bianchi started his apprenticeship in the genoese workshop of Agostino DePlanis during the twenties; he became a professional violinmaker only during the forties, being previously a musician and a dance teacher.

After a long period travelling across France, Spain and Portugal he opened his own shop in 1846 in Paris rue Vivienne, and later in rue Neuve des Petite Champs, near Vuillaume’s atelier.

Among his clients we see the most famous italian soloists of the period, such as Piatti, Bazzini, Bottesini and Camillo Sivori who was the sole proprietor of the violin hereby represented.

Back in Genoa in 1867, Bianchi finally moved in 1877 to Nice, France where he died in 1880. Traditionally known as a repairer, Nicolò Bianchi was a conoisseur of classical italian luthery and actually a gifted maker with a strong and creative personality; he was one of the few italian makers of the nineteenth century to make antiqued violins.

Bianchi may be considered the initiator of the nineteenth century school of Genoa and an important reference for violin making in Italy; among his pupil we find Eugenio Praga, Giuseppe Scarampella, François Bovis; he also contributed to the training of Riccardo Antoniazzi.

This violin is a typical specimen of his parisian period, and it comes from the Guarneri del Gesù of 1741 owned by Antonio Bazzini. Camillo Sivori probably asked him a copy of the violin of Paganini; since it was impossible for anyone in those times to take drawings of the famous violin, he tryed to reproduce anyway the general suggestion of the belly of the ‘Cannon’.

The wood of the table comes from an ancient spruce, the black spot in the centre is typical of the antiqued work of Bianchi, the fast, instinctive touch in the exhecution of the effe-hole well matches the spirit of Guarneri del Gesù. Purflings are set near these lightly scooped and rounded borders.

The scroll shows a mature carving technique with a certain french inspiration. The rich and thick oil varnish layed over a deep even ground is one of the most interesting features of this author.

This violin reteins the original fittings, including a shorter fingerboard, typical of that period; the sound is brillant and rich on the trebles strings, deep and dark on the basses.

Many thanks to: Pierre Allain, Eric Blot and Renato Scrollavezza Photo by LineaTre Cremona 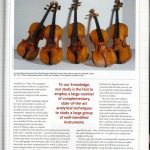 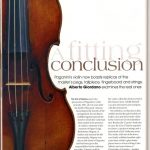