Leandro Bisiach was born in Casale Monferrato on 16th June 1864; he was trained since a young boy to violin playing and to wood working: his father Giovanni was a woodcarver, he made ivory balls for billiard and sometimes accessories for musical instruments. Leandro made his first violin on his own in 1886: having been encouraged to pursue his passion, he moved to Milano and he entered the workshop of the Antoniazzi family; a few years later he opened his first workshop nearby the Piazza del Duomo, the main place of the town.

The fortune of Leandro Bisiach raised up very soon: having been trained especially by Riccardo Antoniazzi, he was succesful in a short time to employ not only his teacher (and occasionally his brother Romeo) but also a number of violinmakers; at the beginning of the century Leandro Bisiach’s workshop was the only one in Italy with an international organization, providing to clients not only new instruments of a different price range, but also restoration and fine antique instruments of which Leandro was a good connoisseur. Since 1916 Leandro moved to Siena where he remained until 1922, entrusting his son Andrea to the management of the workshop; back in Milano, he more frequently worked and lived in his mansion in Venegono where he died in 1945.
Besides his four sons Andrea, Carlo, Giacomo e Leando Jr., Bisiach trained in his workshop many violinmakers, among which are to be mentioned Gaetano Sgarabotto, Camillo Mandelli, Giuseppe Ornati, Ferdinando Garimberti (who always refused to be considered a pupil of him), Paolo Erba, Igino Sderci, Pietro Borghi, Sesto Rocchi. Bisiach had a strong influence in the development of italian violinmaking in the twentieth century: a good violin player himself, he had a particular instinct to classic violinmaking and an artistic talent that allowed him to perform the great masters of the past with intuition ad skill; instruments of his own made are rare and they can be found in his first period, from 1888 up to very early twentieth century: since then the instruments “in the white” were mostly made by his employees, he enjoyed to round the border, to correct the style and to apply the varnish. In this means Bisiach’s violins always show a strong imprint for the model used and for the general taste: the collaboration of his luthiers is anyway always recognizable.
Instrument – The violin hereby focused shows the collaboration of Igino Sderci, who later worked in Florence for Bisiach’s son Carlo; the model used is the Antonio Stradivari “Amatiseé” from 1678, frequently used by the Bisiach family and by their pupils as well.
Made from an internal mould, the interior shows blocks and linings made of lime with the linings precisely mitred in the corner blocks; the upper and lower blocks are branded “L.BISIACH-MILANO”. Archings are quite full and high (about 17mm each) but smartly carved and gently connected to the borders; the lower palettes of the ef-holes are lightly scooped: in the profile of the treble ef-hole it’s visible that the arching was lowered in order to simulate the arching distortion of old violins. Purflings are made of ebony and maple, they are set 3.5mm from the border and they create points with short extensions. The scroll shows a great stylistic control: flanks and first turn are cut quite full and progressively the turn is more deeply scooped, the chamfer is gently rounded. The varnish that covers the violin is of rich and soft texture, laid over a reflective ground that enhance the italian maple wood. 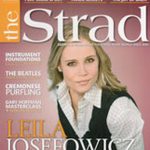 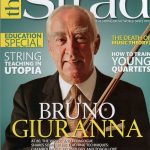