Giuseppe Pedrazzini was the son of a cabinet maker, born in 1879 in Pizzighettone, a village not far from Cremona. He was encouraged by his father to work with wood from an early age, and moved to Milan in 1903 for a position in his uncle’s cabinet- making workshop. It was during this period that he developed an interest in violin making, and he soon started to make and repair his first instruments, following advice from Romeo Antoniazzi, an experienced maker who was at that time working in Antonio Monzino’s workshop. Pedrazzini soon started working on his own, and after trying various locations, in 1934 he moved his workshop to via Cavallotti in central Milan. After winning his first national prize in Rome in 1920, he won again for a quartet of instruments at the 1937 Stradivari bicentennial exhibition in Cremona. Pedrazzini’s fame quickly spread abroad, and as a result he began a lengthy collaboration with London dealers Boosey & Hawkes, to whom he sold a number of his instruments. Pedrazzini’s output is consistent: he used various models, especially Stradivari and Amati, and sometimes Guadagnini, and although he preferred making violins in the new, he also produced a number of antiqued copies that are remarkably inspired and show close respect for Classical style. He played an important role in encouraging the next generation of Milanese makers: Ferdinando Garimberti, Piero Parravicini and Natale Novelli all trained in his workshop.

This violin was made and dedicated to a Maestro Mora, a violinist who taught Pedrazzini’s daughter Yolanda. Based on a Stradivari model, it has spruce interior blocks and well-rounded linings simply set in the corner blocks. On the outside of the ribs at the button, there is a tapered ebony insert at the joint. The belly archings are 15.5mm high, and those of the back are 14.5mm, with the curves well connected to the edge and quite full on the C-bouts. The f-holes show well-fluted palettes with tiny nicks, and upper and lower holes that are confidently chamfered and slightly blackened. The purfling is of maple and ebony, and it is set quite close to the edge. It is made from single pieces (there are no joints), creating short corners with no extensions. The scoop is consistent and is connected to a well-rounded and elegant border. The scroll is cut with great confidence and skill, and reveals the maker’s individual creativity. Seen from the front, it tapers strongly, and the long pegbox has walls that are quite thin. At the rear, the dots produced by the point used to transfer the drawing to the wood can still be seen, as well as the deep scoop and the well-rounded edges. The side view shows the typically rounded and deeply scooped turns and the pegbox’s high, S-shaped throat. The varnish, of a good consistency and transparency, is laid over a strong ground that enhances the beauty of the maple’s flames. 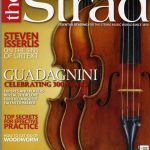 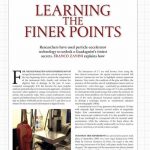 Microtomography on a G.B.GuadagniniThe Strad